How not to combat terrorism

Terrorism is driven by poverty and deprivation in the Third World, right? Surely, a great way to combat it is to give development aid, and make the lives of the poor, downtrodden masses better... or maybe not. ITFD students Cristina Yoong, Rachel Lund, Joonas Uotinen, and Sonja Settele look at the issue in their policy topics presentation. They offer some powerful arguments that question how much, in particular, the US should invest in the largely lawless FATA region in Northwestern Pakistan. They show that most leading terrorists come from more educated, well-off households, and that a proclivity towards terrorism is not significantly correlated across countries with poverty. Even the most optimistic studies suggest that aid would have to be in the hundreds of billions to reduce the recruitment of low-level terrorists by a significant number. Equally importantly, they show that much of the aid actually helps the Taliban directly, through protection money and the like. Their presentation is here:
Terrorism and Aid
Posted by Joachim Voth at 23:31 No comments: Links to this post

Congratulations to Fabio Sola (ITFD 2011) who will be joining the World Bank's country office in Brasilia this fall. He we work in the Lead Economist's office, and will have a chance to apply his econometric skills and understanding of macrofinancial issues.
Posted by Joachim Voth at 05:52 No comments: Links to this post

Attack of the one-armed economists 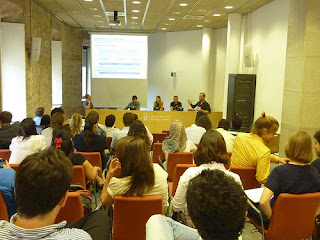 Harry Truman allegedly said that he wanted to meet a one-armed economist, so as to spare himself the endless "on the one hand... on the other hand" that our profession can produce. Well, one of our aims here at ITFD is to breed Truman's favourite type of economists. Teams of 3-4 students practice being "one-armed" at the end of their time here, by writing and presenting a policy topics memo. The idea is to reverse the normal, analytical process where you start with a lit survey and then add gradually some nuggets of knowledge before hedging your conclusions in the summary at the end. Here, we want students to answer a policy questions. Working in teams, we had a bunch of presentations on interesting and creative topics:
It takes a bit of a "gestalt switch" to do what is required here - start with the recommendation, say clearly why you favor it, think about counter-arguments, sum up. How did it work? For my part, I would say it was a pretty impressive show (pics here)
Posted by Joachim Voth at 05:49 No comments: Links to this post

I have been thinking a lot about the Greek debt problem. About a year ago, I looked at the numbers and decided that on economic logic alone, this one will end in a restructuring -- the primary deficit was just too big, and the debt too high. Now that the markets and politicians are debating with ever greater intensity if "reprofiling" or a "soft restructuring" will take place, I am beginning to think that we might actually see this one settled without a default. What's changed? Apart from my contrarian instincts, I think it's important to remember that there are many moving parts here -- the European governments, financial markets, the Greek government, the ECB, and the electorates of Greece and the EU member states stomping up the cash. It's all a bit like a Ruby Goldberg machine, really. The spread on Greek debt has been soaring of late, and the EU needs to decide on some course of action now that the IMF and EU missions are checking that Athens is doing its share. I get the sense that some operators in financial markets are, in a way, lobbying for a default event - anything that allows people to cash in on their CDS.

I think they may be disappointed. I may be wrong, but the rhetoric coming out of Berlin (and recently, Paris) about reprofiling seems more designed to put pressure on Athens than a good predictor of events to come. I am not saying that a restructuring couldn't happen, but given that the ECB is vociferously opposed, and that no EU politician wants to be responsible for the next Lehman disaster (as predicted by the ECB if Greece defaults), I think the current discussion is more designed to get the Greek government going - or, more precisely, to give the Greek government an excuse to tell its electorate that there is nothing that can be done to avoid lots more austerity.

My money is on the following: 1. Tough budget cuts and markedly tougher privatization requirements for Athens, maybe in the form of a semi-autonomous agency a la the German Treuhand that handled sales of the East German assets 2. Fresh loans by the Europeans 3. A "voluntary" roll-over agreement with the banks so that they agree to take fresh Greek bonds as the old ones expire. Some of this will be painful in the short term for Greece and for the banks, but it will save the Greek financial system and keep access to outside funding open. As I have said before, making the tax system less distortionary is good for growth. Also, if the confidence trick works, Greek savers may start putting some money back in their own banks, which will help with recovery... and once hedge funds and private individuals in the markets see that Greek bonds offer 25% and are effectively guaranteed by the EU, yields will come down. That was the hope a year ago, and it didn't work. But that doesn't mean it cannot pan out this time...
Posted by Joachim Voth at 11:28 No comments: Links to this post

Today, there are demonstrations in Barcelona and across Spain against "the political class, the crisis, and the fact that people who lose their house because they can't pay the mortgage still owe something to the banks..." or so my cabby explained. The last bit is interesting. Dación en pago, the idea that someone who borrows on mortgage can just hand back the keys, has become the fantasy of many Spanish house buyers who are faced with negative equity. In the US, this happens a lot; many states allow the practice. In almost all European countries, including Spain, it's a no-no.

So who is right? It's actually not very hard to think through the consequences. Allen and Gale have a beautiful paper that looks at exactly this kind of thing. It's called "Bubbles and Crises". The idea? If you have a "stupid" bank that, on average, loses money, its lending is likely to create bubbles galore. The reasons is risk-shifting. If you borrow to buy an asset, and it goes up in value - bingo, you are rich. If it goes down, you just hand it back to the bank. Since none of your money is at risk, you can't lose. How much of that asset do you want to buy? Me personally, a lot. Sign me up. Actually, double that. And so on. Of course, this creates price pressure upwards... The downside of the model was that it required a stupid bank that lost money on average. But if there is one thing we have learned in the last 10 years, it's that there is no shortage of stupid banks. So, while handing the keys back to the bank and cancelling all debts sounds nice ex post for those who got themselves mortgages that were too big relative to their incomes, it is really, really bad policy. The depressing thing, of course, is that given how loud vox populi is, it is not impossible that someone somewhere will want to garner some votes by changing the rules.
Posted by Joachim Voth at 08:03 No comments: Links to this post

The first ITFD graduate to join the Jamal Poverty Action Lab (J-PAL) is Max Bode, who is graduating this summer. He will be heading to India for a month of data work with Erica Field and Rohini Pande, before working at the Harvard location of J-PAL for the next two years.
Posted by Joachim Voth at 16:44 No comments: Links to this post

The first time I enjoyed a rap song...

Keynes vs. Hayek [thanks to Greg Mankiw for the link]

http://gregmankiw.blogspot.com/2011/04/keynes-vs-hayek-round-two.html
Posted by Joachim Voth at 22:02 No comments: Links to this post