spot the only (!) European place on the Princeton list (via the jmwiki):

Posted by Joachim Voth at 08:25 No comments: Links to this post

a friend just alerted me to a (quite dated) blog post by one Dr. Duke, apparently a former member of the House of Representatives, about Nico's and my research on anti-semitism. It's polemical and silly... as one would expect from a white suprematist who is selling titles like the following through his website:

Originally published in 1933 by The General League of Anti-Communist Associations. Shows that during the period of the Weimar Republic, Jews heavily dominated industry, finance, commerce, medicine, law and theater, yet made up only 1% of the population. The Jews became apostles of communism and carriers of corruption, which forced the Government of Germany to adopt certain legal measures to curtail the authority exercised by Jews. Contains many pictures and charts. 8 1/2" x 11", 32 pages.

Rubbing people up the wrong way is normally not a good idea, but I, for one, am kind of proud of the hate mail and silly posts that continue to trickle in response to Nico's and my research.
Posted by Joachim Voth at 01:53 No comments: Links to this post

not the austerity paper again! Well, yes. La Vanguardia runs an annual competition for the best piece of scientific research in Spain... and Jacopo and I are finalists, out of a group of eight. Our joint paper investigagtes the effects of austerity on social unrest and instability:

Does fiscal consolidation lead to social unrest? Using cross-country evidence for the period 1919 to 2008, we examine the extent to which societies become unstable after budget cuts. The results show a clear correlation between fiscal retrenchment and instability. We test if the relationship simply reflects economic downturns, and conclude that this is not the case. While autocracies and democracies show a broadly similar responses to budget cuts, countries with more constraints on the executive are less likely to see unrest after austerity measures. Growing media penetration does not strengthen the effect of cut-backs on the level of unrest.

Posted by Joachim Voth at 09:05 No comments: Links to this post

one of the reasons 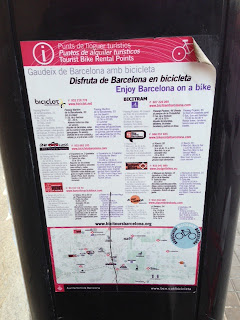 why Spain is poorer than the rest of most of Europe - lack of competition, protection of insiders, low competitive intensity. You want proof? I give you one image.

Like many European cities, Barcelona has a bike renting scheme, run by the city. You pay a modest fee per year, and you can rent bikes as often as you like, all over the city. Use it for less than 30 minutes each time, and you don't pay a penny extra. For the most part, it works great. Visitors are VERY keen to use this - and they can't. Why? Because the firms that rented bikes to tourists made sure through a major lobbying effort that they can't. The public system even advertises where to rent a bike if you are not a local (picture). The idea is to protect local businesses. Hmmm.

And it is not just the slightly unsavory let's-rip-off-the-foreigners; it costs the public system real money. Half the day, stations are either overflowing (with no place to leave your bike) or empty. Why? Because people live in one corner of the city, and work in another. If tourists used the system (as they can with great ease in Paris, say), there would be many more matching flows - tourists going one way, to areas with tourist attractions but where people live (Sagrada Familia, say), and citizens going the other (down to the sea, where many jobs + hotels are). So protecting insiders a. raises the cost of the public system, with lots of little vans driving around redistributing bikes (yes, all very ecological) b. costs revenue c. keeps firms in business that add nothing to social welfare, other than redistributing money.

Posted by Joachim Voth at 08:19 No comments: Links to this post