Austerity and Unrest Over the Long Run

With riots in London last night and the heavy smell of tear gas still lingering over the Acropolis, Jacopo Ponticelli and I thought we'd look at the connection between budget cuts and unrest more systematically. The working paper is now out. We look at the extent to which riots, demonstrations, political assassinations and general strikes increase as governments cut expenditure in Europe, 1919-2009. Here is the abstract:

Does fiscal consolidation lead to social unrest? From the end of the Weimar Republic in Germany in the 1930s to anti-government demonstrations in Greece in 2010-11, austerity has tended to go hand in hand with politically motivated violence and social instability. In this paper, we assemble cross-country evidence for the period 1919 to the present, and examine the extent to which societies become unstable after budget cuts. The results show a clear positive correlation between fiscal retrenchment and instability. We test if the relationship simply reflects economic downturns, and conclude that this is not the key factor. We also analyse interactions with various economic and political variables. While autocracies and democracies show a broadly similar responses to budget cuts, countries with more constraints on the executive are less likely to see unrest as a result of austerity measures. Growing media penetration does not lead to a stronger effect of cut-backs on the level of unrest.

And here is our answer, in one slide: 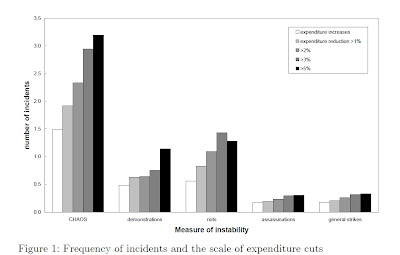 The bars show the number of incidents - CHAOS aggregates them all, and then you have the components -- demonstrations, riots, assassinations, and general strikes. As the bars get darker, cuts get deeper. Once you cut expenditure by more than 2% of GDP, instability increases rapidly in all dimensions, and especially in terms of riots and demonstrations.

Sure, there are many incidents that can lead to an eruption of violence– from the killing of Mark Duggan in London last Saturday to a high-speed pursuit gone wrong (in the case of the Rodney King riots in LA in 1992). The more interesting question is -- why are cities at some points in time more akin to a tinderbox? Why does it only take one incident for massive violence, riots, or anti-government demonstrations to erupt? Even if there is something else that provides the spark, you want to know why there is so much dry wood around that you get a conflagration. Here, our results suggest that the role of budget measures is important.

We also use some additional, more detailed data on the causes of each demonstration to confirm our hypothesis that the link is causal. Incidentally, the same pattern is apparent in Latin America since 1937.

So, if you ever found yourself reading papers by Alesina and co-authors arguing that i. budget cuts can be good for growth ii. there is no punishment at the polls for governments cutting expenditure, and wondering why governments don't engage in more austerity - maybe here is your answer. Even if (and it's a big if, given the IMF's latest research) Alesina et al. are right, and growth can follow cuts, the pain may be concentrated amongst some groups. If these become massively unhappy... it can start to look pretty ugly out there in the streets, and I doubt that that'll be good for growth. As a matter of fact, Nick Bloom of Stanford has a bunch of fantastic papers showing just how painful uncertainty shocks are in terms of subsequent economic performance.
Posted by Joachim Voth at 13:38