Want to know why Catalans want to leave the loving embrace of Spain? 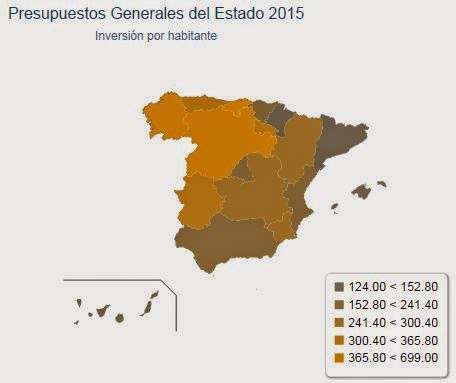 Well, there are many reasons. Good ones. Like not having your language recognized as an official language in which you can go to court; write to the authorities, etc. Having an education minister who runs around telling everyone that his government's aim is to hispanisize the Catalan people (imagine a German minister did that Schleswig-Holstein, speaking about the Danish minority). Etc.

People always think it is about money; all the money Catalans send to the rest of Spain since they are so much more productive. And yes, they don't like it. But the thing few people realize is that this is only one side of the equation; the other is the shameful failure on the side of Madrid to put any money into Catalonia. It's the economic powerhouse of a country with a pretty ramshackle economy overall; you'd think you would put some serious cash into infrastructure there.

What does it look like? Have a glance at the map. This is the investment per capita by the central government. Grey means - less than 150€ per head. The total comes to 9.5% of the overall spending on investment -- but Catalonia produces ~20% of output. Just ten years ago, the investment share was at least 16%, still too little, but not a joke. Now, Catalonia receives only half of its fair share.

Where does the money go? Galicia, and other delightful places like that. They receive 360€+ per head -- more than twice the Catalan number. No matter that there is nothing there except old-age pensioners and civil servants; let's build roads, railways, airports, universities, etc. [remember where Mr Rajoy is from? Right. And that his own Treasurer's secret books revealed he received €€€ from building companies? Never mind].

When the history of Catalonia's separation from Spain will be written in the future, look for a version of this graph to illustrate the high-handed folly and sheer bloody-mindedness of the nationalists in Madrid. What a way to drive people away.
Posted by Joachim Voth at 11:14